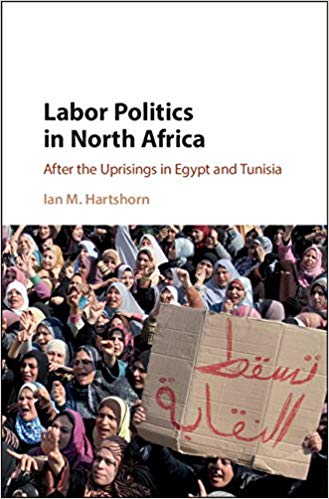 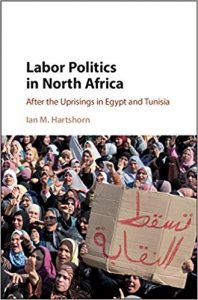 POMEPS is pleased to announce the Washington, D.C., book launch of Ian M. Hartshorn’s new book, Labor Politics in North Africa: After the Uprisings in Egypt and Tunisia, (Cambridge University Press, 2018) with POMEPS on Monday, October 7, 2019 at 12PM at the Elliott School for International Affairs, Room 505.

Prior to the Arab Uprisings of 2010-11, formerly quiescent trade unions became key sites of contention. Union politics across both Tunisia and Egypt were transformed. While Tunisia witnessed the apparent success of worker power, Egypt experienced economic crisis and repression. Drawing on extensive interviews, Hartshorn explains this phenomenon.

Ian M. Hartshorn is Assistant Professor of Political Science at the University of Nevada, Reno. He holds a B.A. in Religion from Bucknell University and a Ph.D. in Political Science from the University of Pennsylvania. He is a former co-chair of the Labor Politics Group of the American Political Science Association and a member of the Middle East Studies Association. His work has appeared in Political Research Quarterly, Terrorism and Political Violence, and Global Governance. His interests are in comparative political economy, labor movements, and transnational migration, and his current research looks at speech acts in the Middle East and refugee resettlement in the United States.