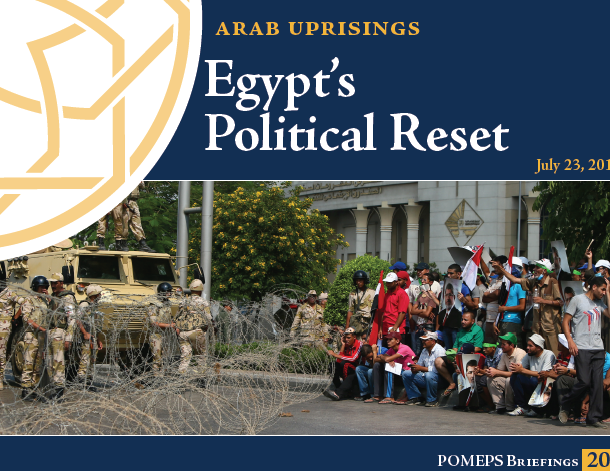 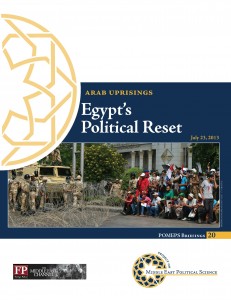 How should analysts understand the combination of the June 30 massive popular mobilization and the July 3 military coup against then-President Mohamed Morsi? Should these events be understood as a continuation of the January 25 revolution, a second revolution, a straightforward military coup, or a restoration of the Mubarak-era order? Does the blame for the failure of Egypt’s first popularly elected presidency lie with Morsi and the Muslim Brotherhood, with a recalcitrant opposition, with a resistant state, or with the deep problems which any transitional leadership would have confronted? Can a pathway toward a democratic order still be found?

Egypt’s Political Reset, the latest in the POMEPS Arab Uprisings Briefing Series, collects 15 recent Middle East Channel and Foreign Policy essays written by academics grappling with these issues. The essays range widely across a diverse range of interpretations and analysis. They include historical comparisons and cross-national comparisons alongside close examinations of the Egyptian police, the military, the state, and the Muslim Brotherhood. These essays offer no  analytical consensus nor a clear path forward — and nor should they.

The level of analytical disagreement and the intensity of the public contestation over the interpretation of these events has been quite striking. It is not simply a question of listening to Egyptians: no more of a consensus on these core questions exists in Egypt than in the academic or analytical communities. Many Egyptian activists, academics, political analysts, and politicians have been at great pains to convince outsiders that their efforts represented a revolution and not a coup. The abuses of democratic process by the Morsi government and the massive numbers in the streets as an alternative measure of the popular will, they argue, outweigh Morsi’s claimed electoral legitimacy. Morsi’s own mistakes and refusal to compromise, the anti-democratic practices which occurred under his watch, and the escalating risk of civil war forced the SCAF’s hand. The June 30 rebellion, in this view, should be seen in the same light as the January 25 revolution, with a mobilized street rejecting the imposition of a new authoritarianism by unaccountable elites. The military should be applauded for saving democracy from Islamist takeover.

Skeptics are more impressed by the July 3 coup and the restoration of the Mubarakist state. They see little cause to celebrate the military overthrow of Egypt’s first elected president, no matter how miserable his performance in office. The military removing an elected president, suspending the constitution, and arresting leaders of the former government are the very definition of a coup. Nor are many of the supposedly distinguishing features of Egypt’s experience unique: coups are often preceded by popular mobilization and happily received by opponents of the former regime. Coups do sometimes lead to the restoration of democracy, but the record of authoritarian regimes in the Middle East delivering on their promises to cultivate civil society, deliver effective technocratic governance, and prepare society for real democracy is not strong.

Events since the coup offer highly mixed signals for what might be coming. Optimists are cheered by the appointment of a relatively competent government which includes key liberal icons such as Mohamed ElBaradei and promises of early elections and rapid constitutional reforms. In addition, many of those hostile to the Muslim Brotherhood are enthusiastic about the crackdown on the group regardless of whether it leads to democratic reforms. Others are troubled by the wave of pro-military nationalism in the media, reports of coordination between protest organizers and the military ahead of June 30, the ongoing mobilization by pro-Morsi forces, the severity of the July 8 attack on a pro-Morsi demonstration and ongoing violent clashes, the support for the new government by anti-democratic and anti-revolutionary Gulf regimes, and the seeming return of many features and faces of the old Mubarak regime.

However events play out, Egypt’s uprising and coup have laid bare deep questions about the meaning of democracy and the sources of legitimacy in its emerging political order. Critics of the Morsi government pointed with justification to its majoritarian view of democracy and attempts to grab power, while its defenders highlighted the repeated interventions by the courts, including the dissolution of parliament. What does this mean for the construction of a new political consensus in the midst of deep polarization and the absence of any democratically legitimate political institutions? While the ballot box may not be the only source of democratic legitimacy, it is a crucial one. Democracy cannot simply mean “rule by those with whom the analyst agrees.” Nor is it possible to build a genuinely democratic order around the exclusion of the Muslim Brotherhood, a significant political force in spite of its political mistakes and the intense hostility it now generates among many Egyptians.   The popular mobilization around the rejection of the Brotherhood’s abuse of state power suggest the continued potency of a mobilized Egyptian public, at least when its grievances align with the preferences of the military and elites. Competing mobilizations in the streets are a poor substitute for elections as a mechanism for determining levels of popular support, and run the risk of perpetual instability and failed governance.

The essays in Egypt’s Political Reset cover a wide range of these intensely debate issues. It might usefully be read with the March 2013 POMEPS Brief Egypt Policy Challenge, which compiled the suggestions by more than a dozen top analysts on how the United States might most usefully support democratic change in Egypt. That phase of Egypt’s tortuous transition has ended, for better or for worse, but what will replace it remains very much in doubt. We hope that the essays collected in Egypt’s Political Reset help to place these events into perspective and offer some insights into the challenges to come.