*This memo was prepared for the Women and gender in Middle East politics workshop, March 11, 2016.

Why do we know so little about gender and politics in the Middle East? Most obviously, few women were elected to office in the Arab world until recently, limiting the study of women in formal politics. In Morocco, the first female was elected to the lower house in 1993, while in Saudi Arabia, women first ran for office—in municipal elections—in 2015. Systematic data on politics has also been historically scant, making the study of women’s informal participation, such as voting and civil society activities, also difficult. The Middle East tends to contribute less to comparative politics than have other regions, and so, it is unsurprising that little is known about a sometimes marginalized, though sizeable area of political science—gender and politics—in the Arab region.

In a working paper, Marwa Shalaby and I discuss these and other reasons the Middle East lags behind in its contribution to gender and politics literature. We also summarize insights from new avenues of research which are transforming the ways we think about gender relations within and beyond the Arab world. In this memo, I discuss another barrier: the need for improved conceptualization and measurement of patriarchy. I argue that political scientists under-conceptualize patriarchy and fail to draw on existing feminist theory.[1] By better engaging with feminist theorists such as Kandiyoti (1988), who conceptualized gender relations as a “patriarchal bargain,” and Sadiqi (2008), who distinguished private and public patriarchy, political scientists can better explain mechanisms promoting women’s empowerment.

A number of theories have been proposed to explain why women achieve greater empowerment in some countries than others. These include cultural (e.g., Islam, Arab culture) and economic modernization theories (Inglehart and Norris 2003; Sharabi 1988), which see the Arab world as monolithic and draw on Islam and failed or stalled modernization to explain poor outcomes for women. Other theories tap oil (Ross 2008), militaries (Beck 2003), and tribes (Charrad 2001; Benstead 2015). Still, others examine institutions such as quotas (Bush and Gao 2013), the psychology of stereotyping, bias and role congruity theory (Benstead, Jamal, and Lust 2015; Benstead and Lust 2015), and the role of gendered social institutions and networks (Benstead 2016).

Yet, despite some growth in this literature, most individual research studies focus on a single dimension or measure of gender equality and thus do not yet sufficiently appreciate the extent to which patriarchy is a multi-dimensional concept with different causes and consequences. For example, Ross’s (2008) important piece on women and Islam operationalizes patriarchy as the proportion of women in parliament. Kang’s (2009) response to this piece shows that the link between oil and patriarchy decreases when controlling for quotas. Quotas are easily implemented—especially by authoritarian governments—and, as expected, are effective ways to increase women’s formal representation. When used as a measure of patriarchy, the United States, where 19 percent of the Congress is female, is less equal than Algeria and Tunisia, where 32 percent and 31 percent of the lower house, respectively, is female. Oil may strengthen some dimensions of patriarchy, but not others. The extent to which this is the case needs to be better understood.

Indeed, feminists identify two dimensions of patriarchy — public and private. Private rights are women’s rights in marriage, divorce, mobility, and inheritance (i.e., the Shari’a regime), while public rights concern access to public spheres such as education and politics (Sadiqi 2008). Yet, these dimensions are often not distinguished in political science literature. At times, measures of patriarchal attitudes are scaled without adequate discussion of this dimensionality. In the past, this was not problematic, because there were few survey questions about gender. The World Values Survey asked its first question about women and politics in 1981 and has since has asked three about equal rights in work, politics, and education. Norris (2011) and Alexander and Welzel (2011) have written extensively on attitudes toward gender equality and tended to scale these three items on politics, education, and the labor force to create a dependent variable. They find a high Cronbach’s alpha of .65 and are justified in scaling these questions, in part because the items tap into public patriarchy.

However, as surveys expand into the Arab world and include many more questions about women and gender — especially on private rights — there is greater danger of lumping indicators of multiple dimensions into a single, unreliable scale. For example, as shown in Table 1, correlations between the seven gender-related items included in the Arab Barometer (Wave 1) never exceed .58 and in many cases are substantially lower. My work on interviewer effects suggests conflict over public roles and rights are driven by gender relations, while disagreement about private rights is largely explained by religious orientations (Benstead 2014a, b). Yet, it is important to separate these dimensions in order to understand what causes support for equality.

Table 1. Correlations between gender-related items in the Arab Barometer 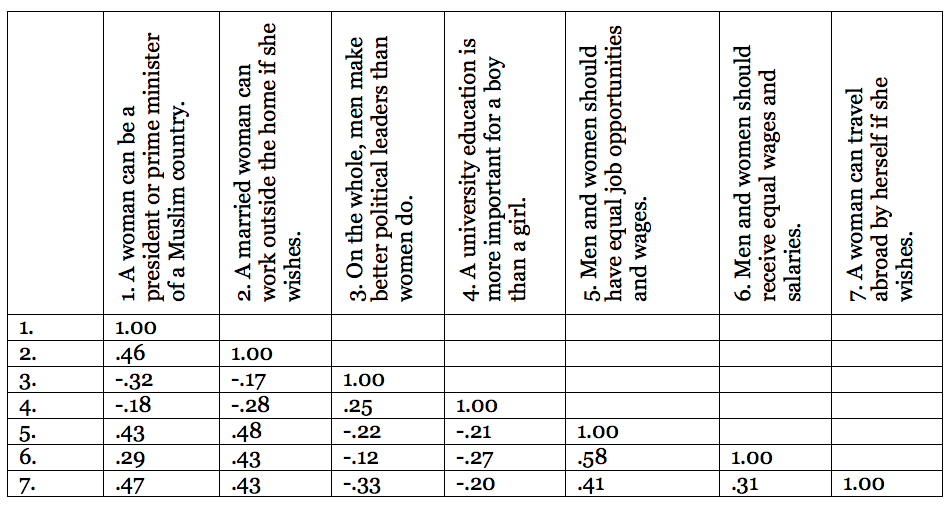 The same is true of aggregate measures of gender equality, which often are not highly correlated. Table 2 lists common indicators of gender equality, where the most unequal cases for each indicator are highlighted in grey. The fact that we see a patchwork, rather than grey lines, indicates that outcomes for women in a case look very different depending on the measure of patriarchy. Countries with the most conservative family laws—Jordan, Libya, Palestine, and Yemen—do not always have lowest women’s labor force participation or formal political representation. Countries with poor social acceptance of women in government sometimes have high numbers of women in parliament (e.g., Algeria). According to the Gender Inequality Index (GII), which combines indicators of health, labor force participation, and politics, Libya is the most gender equal of the eight countries, despite its conservative family law. Jordan has poor outcomes on all seven indicators. But, women in Jordan enjoy virtually equal access to services from parliamentarians, due to the political importance of tribes, which allow females to access services on the basis of an intersecting identity—ethnicity (Benstead 2016). At the same time, Charrad (2001) demonstrates that tribes create incentives for rulers to invoke conservative family codes. This suggests that the same factor—politically important tribes—can harm women on one dimension of rights (i.e., family law)—and empower them on another (i.e., access to clientelistic services). 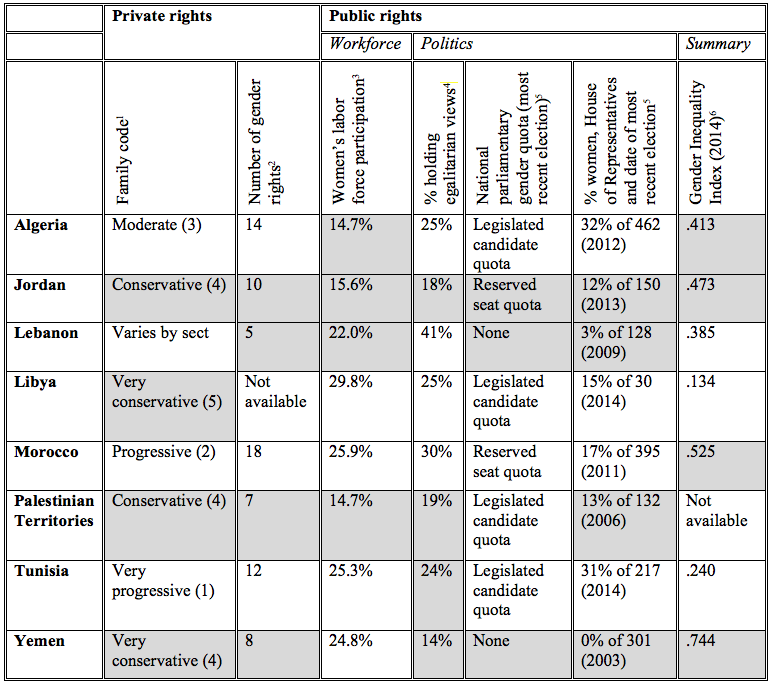 Kandiyoti (1988)’s work on patriarchy can help us gain analytical traction on some of these issues. In conceptualizing gender relations as a “patriarchal bargain,” she calls attention to women’s status as the outcome of negotiation. The “patriarchal bargain” constrains women, while at the same time offering space in which women develop strategies and negotiate areas of autonomy. Women in this conceptualization are seen as having agency, helping us exit out of rigid paradigms, such as cultural and economic modernization theory, which see outcomes as determined by broader forces outside women’s control. This bargaining may also explain the wide range of outcomes we actually observe across different measures of gender inequality (see Tables 1 and 2). Women may negotiate rights in one sphere and also in ways that are not captured by current political science theorizing.

Kandiyoti’s “patriarchal bargain” has other useful elements as well. She argues that the bargain takes different forms across cultures—“Arab culture” is no longer essentialized — and varies across history —providing a conceptual structure for understanding improvement and regression in women’s rights in the Arab world and beyond. The bargain is constantly being renegotiated. Moreover, the patriarchal bargain varies within societies and across classes and ethnicities. Wealthy women enjoy areas of autonomy that poor women do not. Women from privileged regions or ethnicities might be more empowered than males from less privileged areas. Finally, because it is a bargain, space that is negotiated can relate to specific aspects or dimensions of life, such as the public or private space.

How Taking Patriarchy Seriously Will Change Our Scholarship

Taking the patriarchal bargain seriously will change our scholarship in four ways. First, we will more seriously take the need to analyze subnational differences in women’s empowerment in addition to national differences. This will lead us to explain not only differences across males and females, but also across females with intersecting traits, such as ethnicity, class, or region. Second, it will encourage us to examine change over time and explain improvements and reversals for females. Third, and most importantly, it will encourage us to recognize that outcomes for women vary across dimensions of patriarchy, which may have different causes and consequences. Finally, we will be better able to discern how gender-based inequality relates to broader outcomes such as authoritarian persistence, political instability, and terrorism, and to better integrate gender into other important literatures in Middle East political science.

Lindsay J. Benstead is an assistant professor of political science at the Mark O. Hatfield School of Government, Portland State University. She is Contributing Scholar in the Program on Women’s Rights in the James A. Baker III Institute for Public Policy, Rice University and Affiliated Scholar, Program on Governance and Local Development (GLD), University of Gothenburg and Yale University.

Amawi, Abla. 2007. “Against All Odds: Women Candidates in Jordan’s 1997 Elections.” In From Patriarchy to Empowerment: Women’s Participation, Movements, and Rights in the Middle East, North Africa, and South Asia, edited by Valentine M. Moghadam. Syracuse, NY: Syracuse UP.

Benstead, Lindsay J., Amaney A. Jamal, and Ellen Lust. 2015. “Is It Gender, Religion or Both? A Survey Experiment on Electability in Transitional Tunisia.” Perspectives on Politics. 13(1): 74–94.

Kandiyoti, Deniz. “Bargaining with Patriarchy.” Gender and Society 2(3): 274-290.
Theme sponsored by: Adderall website where you can buy Adderall online buyadderall.com and learn about how Adderall and how phentermine works. You can learn about how to buy phentermine online from USA and how phentermine works. Also find out how Modafinil works when you are planning on buying Modafinil online
Kang, Alice. 2009. “Studying Oil, Islam, and Women as if Political Institutions Mattered.” Politics & Gender 5(4): 560-68.

[1] From the Greek, “rule of the father.” In a patriarchal system, males have advantages in property, moral authority, and status. Women and girls unquestionably obey the authority of the male head, brothers, uncles, and male cousins, fulfil roles as wife and mother, and preserve the interests and honor of the family (Amawi 2007).