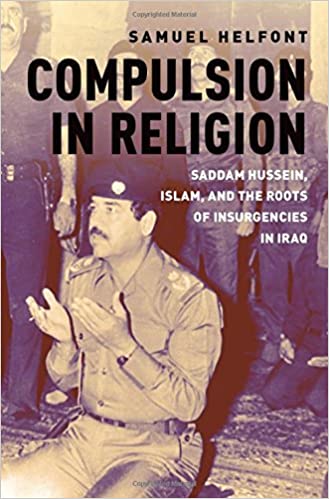 Samuel Helfont talks about his latest book, Compulsion in Religion: Saddam Hussein, Islam, and the Roots of Insurgencies in Iraq, with Marc Lynch on this week’s podcast. The book investigates religion and politics in Saddam Hussein’s Iraq as well as the roots of the religious insurgencies that erupted in Iraq following the American-led invasion in 2003. 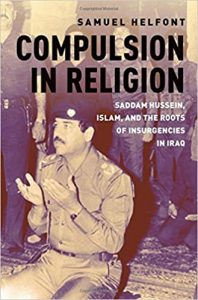 Helfont said, “I found that there was proliferation of religious symbols and religious rhetoric in Iraq, especially in the 1990s, but when you sort of dug down you see that all of this was promoted and created by the regime. Not as a way to embrace Islamism but as a way to combat it.”

“The assumption on the US part was that the Iraqis really didn’t have control, which I find to be just a huge mistake on behalf of people planning the war in 2003. And they go in thinking that the regime, when it crumbles, isn’t going to have much effect on Iraqi society or the religious landscape to the sense that they thought about it because they didn’t think the regime really had control. What you find is that the regime had a very strict control,” said Helfont.

Helfont explained, “[Saddam Hussein] thinks that religion could be an important instrument for him and his regime, but he has a problem which is that he doesn’t control the religious landscape. So you can’t get into the public and start saying to people ‘Hey be a good Muslim’… So you see Saddam and his regime, the Ba’thist regime, begin to try to shape the religious landscape, try to eliminate people they’d see as problematic, try to replace them with people that they think are more loyal to the regime or at least will follow the rules.”

Samuel Helfont is an Assistant Professor of Strategy and policy in the Naval War College program at the Naval Postgraduate School in Monterey, California. He is also an Affiliate Scholar in the Abbasi Program in Islamic Studies at Stanford University and a Senior Fellow at the Foreign Policy Research Institute in Philadelphia. His research focuses on international history and politics in the Middle East, especially Iraq and the Iraq Wars.