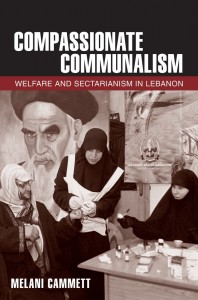 Compassionate Communalism analyzes “the political logics of sectarianism through the lens of social welfare. On the basis of years of research into the varying welfare distribution strategies of Christian, Shia Muslim, and Sunni Muslim political parties in Lebanon, Cammett shows how and why sectarian groups deploy welfare benefits for such varied goals as attracting marginal voters, solidifying intraconfessional support, mobilizing mass support, and supporting militia fighters.” In The Politics of Non-state Social Welfare “a multidisciplinary group of contributors use survey data analysis, spatial analysis, in-depth interviews, and ethnographic and archival research to explore the fundamental transformation of the relationship between states and citizens. The book highlights the political consequences of the non-state provision of social welfare, including the ramifications for equitable and sustainable access to social services, accountability for citizens, and state capacity.” 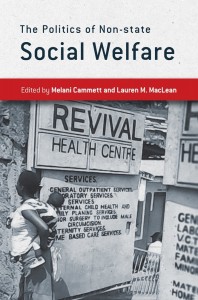 Cammett is an active member of the POMEPS community, often playing a role in planning conferences and workshops. In 2011, Cammett received a POMEPS Travel-Research-Engagement grant to conduct fieldwork in Tunisia, after which she wrote “The limits of anti-Islamism in Tunisia” for the Middle East Channel. On November 2, 2011, Cammett took part in the POMEPS panel “After Tunisia’s Elections” (video of the event available here). — C.K.