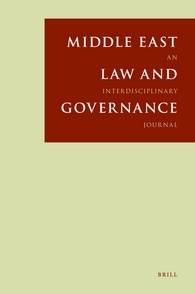 Middle East Law and Governance (MELG) is inviting proposals for a special issue devoted to water.

Environmental issues and climate change have become not only major points of political dispute, but have also called for new approaches in the social sciences to account for systemic challenges that cross the accepted borders of social science disciplines. In the Middle East and North Africa, issues of the environment become particularly complex due to political instability, international intervention, regional conflicts, and the rise of trans-national armed groups. While recent scholarship on Middle East and North Africa has focused on social movements in light of what many have dubbed “The Arab Spring,” that same period witnessed considerable violence and correlatively, extensive demographic displacement (internally and across borders). These recent population displacements, coupled with the associated difficulty of accessing scarce resources, have generated what has been called a “water security” problem.

MELG invites proposals for papers that reflect on what scholars and policy researchers often call “water security” in the Middle East and North Africa. Assuming the state as a principle actor in natural resource management, “water security” regards water as a scarce resource for which need all too often increases in contexts of crises, demographic shifts, and climate variations. However, the primacy of the state in managing water as a resource is also a point of contest among some. This tension is manifest in their preference for the phrase “water sovereignty”, which recognizes the role of informal actors and opens the analysis to distinct questions about formal and informal management, local/regional/or centralized control—questions that allow for an interrogation of the state itself. In other words, water is both an object of analysis and an analytic vehicle through which to assess governance policies, whether by formal state actors or informal parties and social groups. Moreover, more than mere object to be regulated or analytic vehicle for reflecting on governance, water can also exercise a kind of agency that, in its capacity to create and destroy, exercises power over human societies.

Without privileging one expression or another (though acknowledging their salience), or containing the analytic scope of water, MELG invites scholars to consider how water offers a fruitful analytic vehicle by which to reflect on and assess the governing processes and conditions between people, state agencies, and other institutions in the Middle East and North Africa.

All proposals should not exceed 1500 words and must be received by November 30, 2015. Please send all proposals electronically to Ms. Vanessa Zhang (vanessaz.zhang@utoronto.ca) with the subject: “MELG Water Issue.”