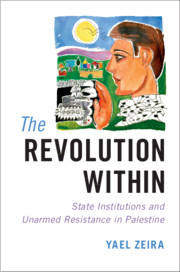 POMEPS is proud to present the book launch of Dr. Yael Zeira’s new book, The Revolution Within: State Institutions and Unarmed Resistance in Palestine (Cambridge University Press, 2019) on February 20th, 2020 at 12PM at the Elliott School of International Affairs, Room 505.

Yael Zeira is currently a professor of Political Science and International Studies at the University of Mississippi. She specializes in the causes and consequences of public opinion and political behavior in authoritarian and conflict settings in the Middle East. Her research has been published in the journals Comparative Political Studies and the Journal of Conflict Resolution.

POMEPS is proud to present the book launch of Dr. Wolfram Lacher’s new book, Libya’s Fragmentation: Structure and Process in Violent Conflict (I.B. Tauris, 2020) on February 26, 2020 at 12PM at the Elliott School of International Affairs, Room 505.

Dr. Lacher analyzes the forces that have shaped Libya’s trajectory since 2011. Questioning widely held assumptions about the role of Libya’s tribes in the revolution, he shows how war transformed pre-existing social structures and explains why Khalifa Haftar has been able to consolidate his sway over the northeast. Based on hundreds of interviews with key actors in the conflict, Lacher advances a new approach to the study of civil wars, placing the social ties of actors at the centre of analysis and exploring the link between violent conflict and social cohesion.

Wolfram Lacher is Senior Associate at the German Institute for International and Security Affairs (SWP). His research focuses on conflict dynamics in Libya and the Sahel region, and relies on frequent fieldwork. Lacher has published in many journals and media outlets, including Survival, Mediterranean Politics, Foreign Affairs and The Washington Post. He received his PhD in Political Science from Humboldt University in Berlin, Germany.

POMEPS is proud to present the book launch of Thomas Heggammer’s new book, The Caravan: Abdallah Azzam and the Rise of Global Jihad (Cambridge University Press, February 2020) on April 3, 2020 at 12PM at the Elliott School of International Affairs, Room 212.

Abdallah Azzam, the Palestinian cleric who led the mobilization of Arab fighters to Afghanistan in the 1980s, played a crucial role in the internationalization of the jihadi movement. Killed in mysterious circumstances in 1989 in Peshawar, Pakistan, he remains one of the most influential jihadi ideologues of all time. Here, in the first in-depth biography of Azzam, Thomas Hegghammer explains how Azzam came to play this role and why jihadism went global at this particular time. It traces Azzam’s extraordinary life journey from a West Bank village to the battlefields of Afghanistan, telling the story of a man who knew all the leading Islamists of his time and frequented presidents, CIA agents, and Cat Stevens the pop star. It is, however, also a story of displacement, exclusion, and repression that suggests that jihadism went global for fundamentally local reasons.

Professor Thomas Heggammer is a s Senior Research Fellow at the Norwegian Defence Research Establishment and Adjunct Professor of Political Science at the University of Oslo. Trained in Middle East Studies at Oxford University and Sciences-Po in Paris, he has held fellowships at Harvard, Princeton, New York, and Stanford Universities, and at the Institute for Advanced Study in Princeton. His books and edited volumes include Al-Qaida in its own Words (Harvard, 2008), Jihad in Saudi Arabia (Cambridge, 2010), The Meccan Rebellion (Amal, 2011), Saudi Arabia in Transition (Cambridge, 2014), and Jihadi Culture: The Art and Social Practices of Militant Islamists (Cambridge, 2017).

POMEPS is proud to present the book launch of Dr. Amy Austen Holmes’s new book, Coups and Revolutions: Mass Mobilization, the Egyptian Military, and the United States from Mubarak to Sisi (Oxford University Press, 2019) on April 9, 2020 at 12PM at the Elliott School of International Affairs, Room 505.

In 2011, Egypt witnessed more protests than any other country in the world. Counter to the received narrative, Amy Austin Holmes argues that the ousting of Mubarak in 2011 did not represent the culmination of a revolution or the beginning of a transition period, but rather the beginning of a revolutionary process that would unfold in three waves, followed by two waves of counterrevolution. This book offers the first analysis of both the revolution and counterrevolution in Egypt from January 2011 until June 2018.

Amy Austin Holmes is Associate Professor of Sociology at the American University in Cairo, Visiting Scholar at the Middle East Initiative at Harvard University, and Fellow at the Woodrow Wilson Center for Scholars. She is the author of Social Unrest and American Military Bases in Turkey and Germany since 1945. Having spent a decade living in the Middle East through the period known as the Arab Spring, she has published numerous articles on Egypt, Turkey, Bahrain, and the Kurdish regions of Iraq and Syria. She has written about human rights violations including the Rabaa/Nahda massacre which she witnessed in August 2013; the crackdown on civil society; as well as the issue of US military aid to Egypt.

Aili Mari Tripp explains why autocratic leaders in Morocco, Tunisia and Algeria embraced more extensive legal reforms of women’s rights than their Middle Eastern counterparts. The study challenges existing accounts that rely primarily on religiosity to explain the adoption of women’s rights in Muslim-majority countries. Based on extensive fieldwork in Morocco, Algeria and Tunisia and an original database of gender-based reforms in the Middle East and North Africa, this accessible study analyzes how women’s rights are used both instrumentally and symbolically to advance the political goals of authoritarian regimes as leverage in attempts to side-line religious extremists. It shows how Islamist political parties have been forced to dramatically change their positions on women’s rights to ensure political survival. In an original contribution to the study of women’s rights in the Middle East and North Africa, Tripp reveals how women’s rights movements have capitalized on moments of political turmoil to defend and advance their cause.

Dr. Aili Mari Tripp is the chair of the Department of Gender and Women’s Studies. Tripp’s research has focused on women and politics in Africa, women’s movements in Africa, women and peacebuilding, transnational feminism, African politics (with particular reference to Uganda and Tanzania), and on the informal economy in Africa. Her current research involves a comparative study of women and legal reform in North Africa.