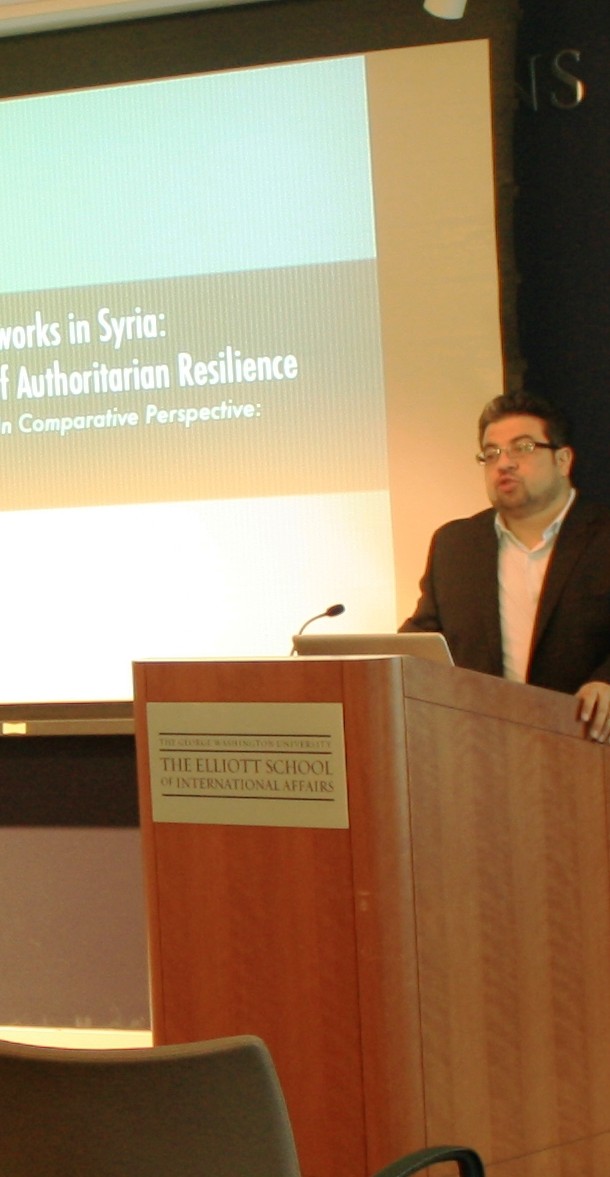 Bassam Haddad is Director of the Middle East Studies Program and teaches in the Department of Public and International Affairs at George Mason University. He discussed his new book, “Business Networks in Syria: The Political Economy of Authoritarian Resilience.”

Bassam Haddad is director of the Middle East Studies Program and professor in the Department of Public and International Affairs at George Mason University. He discussed his new book, “Business Networks in Syria: The Political Economy of Authoritarian Resilience.” Haddad began his talk by looking at the state-business relationship in a comparative perspective, first focusing on the structural backgrounds of the current events unfolding in Syria. He described how in his book, he takes seriously the claim that we can no longer accept culturalist answers and arguments to explain authoritarian resilience. He emphasized his use of the term resiliency, as opposed to a question of authoritarian permanency. One of the greatest sources of this resiliency has been the informal economic business networks that began in the 1950s and 1960s and initially sparked Haddad’s interest.

These early networks had to do primarily with informal and foreign capital. Syria, like Egypt, was not largely influenced by Western countries and institutions. According to Haddad, Syrian informal actors, including state officials and big business, hijacked the process of economic liberalization in the 1980s and 1990s in order to enrich themselves at the expense of three different factors: the average Syrian consumer, the health and product base of the economy, and the medium-term development potential of Syria. Offering structural context, he described a number of “independent variables” that brought about this shift. First, was a legacy of social mistrust between the regime and the business community, where the regime is made up largely of rural minorities and the business community is largely urban and Sunni. Secondly, is the continuous inflow of external rent from oil and aid. He defines “rent” in this sense as a form of income that does not derive from productive activity. After the demise of the United Arab Republic (UAR) and the rise of the Baathists, the regime underwent a shift by aligning with business communities along with a minimal level of distributive policies. The third variable, was the influence of external and domestic institutions and social forces (i.e. an independent judiciary, the media). The fourth variable, was the legacy of mistrust that prevented the state from formally incorporating the business community.

This in essence yielded a form of “embedded autonomy.” According to Haddad, business was primarily dominated by urban Sunni communities. This changed in 1963 under the UAR and the rise of socialist forces, which lowered the role of Sunni business deciders in favor of “socialist development” that included land reforms and nationalization. When Hafez al-Assad came to power in 1970, the system changed once again. Haddad described an interview that he held with a Syrian official, during which he stated that the regime will never tolerate a strong private sector, despite realities that suggested otherwise.

Haddad’s research focused on state-centered approaches with a network-centered form/unit of analysis. He described his intention of using network analysis and class analysis reflected in the form of a pyramidal structure. At the top, with a three way tie was the Syrian bureaucracy (an active part of the network), the regime/military (a passive part), and capital entrepreneurs. In the second tier were the Baath party, the regime elite, the military, and the public. In the third tier, were the private sector, the governing public sector, and the chambers of commerce. In the empirical findings of his research was a real complexity and ambiguity of the concept of the private sector, where the plurality of private assets are owned or controlled by state officials. Another empirical finding was the legacy of mistrust that continues to persist and has shaped the strategies of both the regime and business actors alike, as partners. This legacy persists because of the pattern of recruitment that reinforces the relationship between the regime and the business sector. Likewise, he asserted that economic liberalization in Syria has essentially reproduced the winners of prior arrangements as a strategy of maintaining a qualitative edge. Yet, he reiterated that these new winners remain divided and on the margins. New opportunities that have emerged since 1986 have reflected the interests of entrenched economic networks. In 1985, these networks were 34 percent private and 66 percent public (or part of the regime). By 1993, 65 percent were private while 35 percent were public. Haddad pointed out that the private sector is also a good percentage of the regime.

How wealth was created and new social strata were formed in the 1970s and 1980s is another contribution of his research. He described this phenomenon as a stepping stone into and an important facet of a larger project that he is currently working on, namely the formation of the new upper class in the Middle East and politically constituted social strata. He concluded with his main conceptual and methodological findings: the importance of network analysis, particularly regarding the question of agency; the implications of trust for institution and economic development; and lastly the potential of the synthesis of these areas to open a door to research that combines economic sociology with historical and even rational choice institutionalism.