The July 2010 issue of World Politics features an article by Melani Cammett and Sukriti Issar of Brown University, “Bricks and Mortar Clientalism in Lebanon.” It’s widely known that political movements in the Middle East, especially Islamist movements, win support by providing extensive social services to their constituents. Drawing on innovative GPS techniques and intensive research in Lebanon, Cammett and Issar demonstrate the logic of political mobilization behind the provision of social services by Hezbollah and the Future Movement to people outside of their communities. 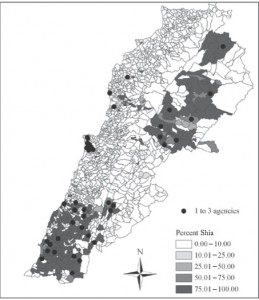 Abstract: In plural societies, social welfare can be a terrain of political contestation, particularly when public welfare functions are underdeveloped and ethnic or religious groups provide basic social services. It is well established that such organizations favor in-group members, but under what conditions do they serve out-group communities? To address this question, the authors compare the welfare programs of the predominantly Sunni Muslim Future Movement and the Shiite Muslim Hezbollah in Lebanon. Although they operate under the same institutional rules and economic contexts and boast the largest welfare programs in their respective communities, the Future Movement aims to serve a broader array of beneficiaries, including non-Sunnis, whereas Hezbollah focuses more exclusively on Shiite communities. Based on analyses of an original data set of the spatial locations of welfare agencies, qualitative data from interviews with providers and beneficiaries, and case studies of areas where the two parties established and did not establish welfare agencies, the authors argue that distinct political mobilization strategies—whether electoral or nonelectoral—explain different patterns of service delivery across the two organizations.