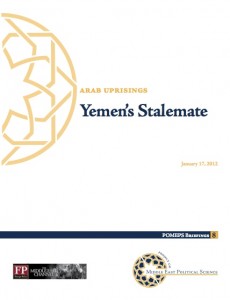 Yemen seems trapped in an endless political stalemate. More than a year after massive protests erupted challenging the 33-year-old regime of President Ali Abdullah Saleh, Yemen seems no closer to achieving a meaningful political transition. The deadlock has persisted despite the outrage over regime violence against civilians, splits at the top of the military, a U.N. Security Council resolution condemning the violence and calling for a transfer of power, a Nobel Peace Prize for leading Yemeni protest figure Tawakkol Karman, and the near assassination of Saleh himself. In the absence of a political solution, the humanitarian situation has dramatically worsened and regional conflicts across the country have intensified. Is there any hope for Yemen?

There is no doubting the astonishing resilience, creativity, and courage of the Yemeni protest movement. The protestors gathered in Sanaa’s Change Square, including Nobel Laureate Tawakkol Karman, represent some of the best and most inspirational of the activists of this past year’s Arab uprisings. It is astounding that they have maintained their energy and kept up their numbers despite massive regime brutality and dim hopes of political success. But they have also struggled to put forth a clear political alternative, and as Stacey Philbrick Yadav has argued, have been badly served both by the “opportunistic opposition” of tribal leaders and regime defectors and by the traditional opposition parties of the Joint Meetings Party (JMP). They have proven that they cannot be silenced, but seem as stymied as anyone about how to break the deadlock.

The poorly conceived transition plan pushed by the Gulf Cooperation Council (GCC) and backed by the United States and the United Nations has proven to be an impediment to meaningful change. It offered immunity to Saleh as an inducement for his departure, but the Gulf states showed little interest in promoting any real democratic change. The GCC plan left the role of the armed forces and other state institutions untouched, and made no provisions for a genuine role for the protest movement. Even so, Saleh failed to sign the agreement for months, instead stalling for time and taking every opportunity to divide and weaken his opponents. In September he returned to Yemen unexpectedly and retook the reins of power.

Many hoped that Yemen would finally move forward when Saleh unexpectedly signed the GCC deal in late November. But instead, as most Yemenis and analysts expected, he has continued to exercise power from behind the scenes. He shows no sign of actually living up to the promise to depart the scene and allow Yemen to move on. The immunity from prosecution guaranteed to Saleh by the GCC deal — and recently extended to all government officials who have served him — outrages many Yemenis. It has provided neither justice nor a political transition. Instead it has rewarded a culture of impunity and given Saleh a blank check to kill.

The presidential elections slated to be held in February are widely seen as a sham, even if they are not postponed, wired to simply ratify the elevation of Vice President Abd Rab Mansour al-Hadi and maintain Saleh’s power behind the scenes. Such elections do not seem likely to either satisfy the protestors or remove Saleh and his regime from real power. Saleh’s family members remain entrenched in key positions in the security apparatus. Meanwhile, as Abdul-Ghani al-Iryani noted in December, Saleh and his regime continue to stall, divide the opposition, and play on Western fears of al-Qaeda.

The costs of this political stalemate are enormous. The mounting humanitarian crisis is reaching staggering proportions. Secessionist sentiment in the south is rising rapidly, while the Houthi rebellion in the north remains potent. Reports of al-Qaeda seizing strategic towns are likely exaggerated, but the jihadist organization is clearly taking advantage of the chaos to build its presence. Real power is devolving to the local level as the political center remains frozen. The absence of legitimate political institutions raises the risks of a complete collapse into civil war.

The international community, including the United States, has only intermittently paid attention to Yemen — an oversight that will haunt it for years to come. The United States too often has been focused on counterterrorism and the struggle against al-Qaeda in the Arabian Peninsula to the exclusion of other issues. This has led too many officials to view Saleh as a necessary partner, rather than the key part of the problem which his regime is, and to trade off the right to carry out drone strikes for real pressure for political change. Even where those tradeoffs are not consciously chosen, the sheer complexity of the problem and the crush of other regional crises have made it difficult for the United States or the international community to act.

In September, Tom Finn asked whether there was “any way out for Yemen.” More than four months later, it is difficult to argue that we are any closer to achieving the meaningful political transition Yemen so desperately needs. At this point, Saleh should be given a deadline to leave Yemen or lose the amnesty promised by the GCC deal (the blanket immunity recently approved by the Yemeni cabinet for all government officials should be rejected completely). The assets of Saleh and regime officials should be frozen and a travel ban imposed until real change is achieved. But even such steps will not be enough without fashioning new Yemeni political institutions which can respond in a meaningful way to the demands and the needs of the protest movement and the diverse regional groups which have so powerfully challenged decades of Saleh’s autocratic rule. Too much time has been lost already.