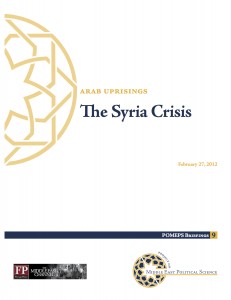 The escalating bloodshed in Syria has rapidly become the center of regional and international attention. While the United States and its allies struggle to find ways to effectively help the Syrian people, the body count mounts and the prospects of a negotiated transition grow dim. Meanwhile, a growing chorus calls for a military intervention to protect Syrian civilians or to accelerate the fall of the regime of Syrian President Bashar al-Assad. The response to the Syrian crisis is shaped by its unique combination of humanitarian crisis and strategic significance. The horrifying death toll and the political failures of the Syrian regime are real, urgent, and undeniable. So are the strategic stakes of a potential regime change in a long-time adversary of the United States and its allies, and the key Arab ally of Iran. The Syrian crisis has revealed and exacerbated the profound tension between the narrative of “Resistance” which has long shaped regional discourse and the narrative of the Arab uprisings. This briefing collects recent analysis and commentary from the Middle East Channel on these urgent questions.

The Syrian uprising caught many observers off guard. Many, including Assad, seemed to believe that Syria would be protected from internal challenge either by its popular alignment with the “Resistance” camp or by its willingness to use extreme force and repression. Both assumptions proved incorrect. Indeed, the massively disproportionate violent response to the initial challenges in March 2011 likely triggered exactly the popular outrage that it had been meant to forestall. And, despite the ongoing support of Iran and Hezbollah for the regime, the “Resistance” card has proven to be of little interest to most Syrians or Arabs outside the hard-line anti-Imperialist Left.

The Syrian uprising struggled to remain non-violent in the face of the attacks by regime security forces. A cycle of violence and mobilization set in, ratcheting upwards toward civil war. The Assad regime failed to offer meaningful political concessions, which might have broken that cycle. The Syrian opposition, for its part, remained dangerously divided and fragmented, unable to put together a coherent political alternative that might reassure or attract the many Syrians who remained with the regime or unwilling to commit. International pressure contributed to the isolation of the Assad regime, as demonstrated by the remarkable 137-22 vote in the United Nations General Assembly in support of a transition plan. Sanctions, along with the effects of the violence, devastated the Syrian economy. But despite the worsening conditions, the core of the regime seems to remain intact and significant portions of the Syrian population appear to still support it and to accept its narrative of being targeted by a foreign, imperialist conspiracy.

Syria has thus become the focal point for rapidly shifting regional norms and power politics. The Arab League has taken an unusually strong role in condemning regime atrocities in Syria, suspending its membership, sending a (poorly executed) observer mission, and leading the charge for action at the United Nations. Qatar and Saudi Arabia have been particularly active, with their media empires blanketing the airwaves with the Syrian opposition’s narrative, vocal attacks on the Assad regime from top leaders, and alleged (though unproven) flows of money, guns, and material support to the opposition. Many Arabs have noted the difficulty of taking seriously the calls for democratic change in Syria emanating from a Riyadh which took the lead role in crushing the Bahraini uprising and treats Shiite protestors in its own Eastern Province as foreign conspirators to be crushed with an iron fist. Turkey has struggled to deliver on its promises, despite its vaunted influence in Damascus. Iran and Hezbollah remain staunch supporters of Assad, which seems to have undermined Hezbollah’s regional appeal. But cracks in the Resistance axis have appeared, with Hamas turning against the Syrian regime, the Muslim Brotherhood strongly supporting the Syrian opposition, and even Iraq voting with the international consensus against Iran’s wishes.

Still, the Security Council could not act over the objections of Russia and China, and last week’s “Friends of Syria” meeting struggled to find a workable path forward. The limitations of international diplomatic efforts have driven the rising calls for military intervention. It is difficult to watch the deaths of so many Syrians, and frightening to envision the internal and regional consequences of an extended, full-scale civil war. But none of the proposed military actions seem likely to either protect Syrian civilians or hasten the regime’s fall. International military action at this point seems more likely to fuel even worse fighting, while helping the Syrian regime to rally domestic opposition to a foreign intervention. Arming the Syrian opposition, the most popular current proposal, is a potential nightmare given the disunity of the Syrian opposition, the immense military advantage enjoyed by regime forces, and the likely impact on those Syrians still backing the regime.

But what then can be done? Some argue that the current levels of bloodshed outweigh any fears about the future and demand military action now. Others warn that an expanding proxy war inside of Syria is currently unavoidable, and argue that since the militarization of the Syrian opposition is inevitable it must be managed. Others argue for enhanced diplomatic pressure, sanctions, and the mobilization of the instruments of international justice. And some argue that Assad is still likely to survive and should be engaged in renewed dialogue about a political transition. These debates will continue to rage as the crisis grinds on. But whatever policy is adopted, the focus must be on protecting Syrian civilians and accelerating progress toward a meaningful political transition that includes all of Syria’s communities.