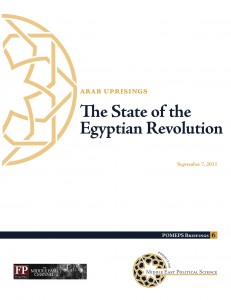 The State of the Egyptian Revolution

The January 25 revolution did not come out of the void. Many of these activists had been protesting for years, as part of the demonstrations in support of the Palestinian Intifada and against the U.S. invasion of Iraq to the Kefaya movement against the succession of Gamal Mubarak and the April 6 Youth Movement in support of labor protests. Those protest movements shattered taboos against criticizing the regime, transformed Egyptian public discourse, and introduced a generation of impatient, frustrated youth to the possibility of political action. Innovative forms of collective action and social networking, such as the “We Are All Khaled Said” Facebook group, brought massive social discontent into the public in new ways. But the activists had largely failed to force meaningful political change, and after absurdly fraudulent Parliamentary elections in late 2010 the Egyptian regime seemed firmly in control.

What made January 25 extraordinary was not that Egyptians protested against the Mubarak regime — that had been happening for a decade. What made it extraordinary was that for the first time, hundreds of thousands of ordinary, non-activist Egyptians joined them on the streets to demand the overthrow of the regime. In the months since Mubarak fell, the Supreme Council of the Armed Forces (SCAF) has ruled without any civilian institutions. Its behavior, as recounted by Hanna and Aziz, has been erratic and frustrating to many Egyptians. It antagonizes protestors, with nigh-indefensible use of military trials and security forces repressing demonstrations, but repeatedly responds to their demands if enough people come into the streets. It promises early elections, but leaves the actual election law and procedures in an ambiguous state of uncertainty. It rejects the call for drafting a new constitution before elections, but then reverses itself to accept the idea of “Supra-Constitutional Principles.” For most Egyptian activists today, the SCAF has become the face of the counter-revolution.

But even as the SCAF infuriates activists, who have long since abandoned the slogan of “the people and the army are one hand,” it remains by far the most popular and trusted institution in the country. Activists, as discussed by Strasser, Hellyer, and Lynch, have struggled to retain a comparable level of popular sympathy. At times they have broken through to rekindle massive demonstrations, especially with a glorious showing on July 8. But most of their recent calls for “million man marches” have produced only tiny demonstrations by dedicated activists comparable to pre-revolutionary days. The decision to occupy Tahrir Square after July 8 proved disastrous, alienating most of the Egyptian public. The march on the Ministry of the Defense was met with violence by the locals in Abassiya. Most of the activist groups decided to leave Tahrir before Ramadan, while the rest were cleared away — quite brutally — by security forces.

Activists have therefore struggled to find a workable strategy. The masses that joined them to overthrow Mubarak have proven less interested in the cacophony of issues that now motivate the activist groups. Some (see Beinin and Fadel) propose refocusing on economic and social issues. But most remain primarily focused upon their own issues — the right to protest, military trials for protestors, baltagiya attacks on protests. Their anger and dismay with the SCAF is increasingly affecting the prospects for a legitimate democratic transition. The same activist groups which detest the SCAF repeatedly push for policies which would perpetuate its place in power — from “Constitution First” to demands to delay the election to give them more time to organize to an appeal to draft an entirely new election law. There is a growing risk that these groups will boycott the upcoming elections (see Lynch), which would badly stunt their legitimacy.

Islamists have done well in the new Egypt, but face many problems of their own. Perhaps the most surprising development has been the meteoric rise of politically engaged Salafi groups (see Bohn) and even former jihadist organizations (see Ashour). The massive Islamist rally on July 29 in Tahrir Square (see Lynch) shocked Egyptians and the international community alike — and even surprised the Salafis themselves. The Muslim Brotherhood has relentlessly organized for the upcoming elections (see Brown), but has shown signs of strain. It has lost many of its best youth activists, struggled with the new Salafi challenge on its right flank, and has been uncharacteristically clumsy in its political maneuvering.

Where is the Egyptian revolution today? Hosni Mubarak, his sons, and top former regime officials are on trial (see Browers). Parliamentary elections are scheduled for November. Changes have swept the country at all levels. But people nevertheless feel despondent. The economy continues to struggle. Violence in the Sinai rattles nerves. The SCAF remains inscrutable and unaccountable. And activists find themselves under pressure. This briefing lays out the best of the Middle East Channel’s reporting and analysis from the last few months to show where Egypt has been and where it might be going.