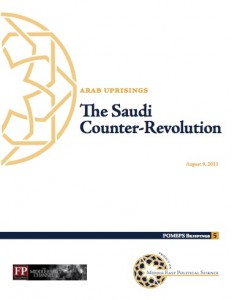 Late at night on Sunday, August 7, King Abdullah of Saudi Arabia delivered an unusual televised rebuke to Syria’s Bashar al-Asad calling on him to “stop the killing machine” and immediately begin reforms. The Saudi move against Damascus was only the latest twist in Riyadh’s newly energetic foreign policy. Since March, Saudi Arabia has been in the forefront of a regional counter-offensive designed to blunt the momentum of the Arab uprisings and shape the new regional order to its liking. After a decade of a regional order defined by an alliance of “moderate” autocracies aligned with the United States and Israel against a “Resistance” axis, the Saudis have responded to an age of revolution by leading what many now call a regional counter-revolution. This has placed them at odds with the Obama administration in key theaters, disrupted long-standing alliances, and brought Riyadh to the forefront of regional diplomacy.

There were good reasons to believe that Saudi Arabia might itself be caught up in the regional storm. It has a large population of frustrated youth, high rates of unemployment or underemployment, and considerable pent-up resentment. Its religious establishment maintains rigid control over the public sphere, even as the population is thoroughly saturated by alternative messages through satellite television and the Internet. An aging and divided leadership holds out the possibility for dangerous succession struggles. It has a serious sectarian Sunni-Shi’a divide. And it has a tradition of demands for political reform from both Islamist and liberal (in a Saudi context) challengers. Nevertheless, the much-hyped #mar11 hashtagged revolution aimed at Riyadh fizzled. The Saudi regime moved quickly to shored up its home front. There King Abdullah combined ruthless repression of potential challengers with a package of sweeping subsidies and targeted financial inducements. While these might bust the budget in the long term, they succeeded for the time being in placating key sectors of potential dissent.

With the home front secure, Riyadh made Bahrain the first great battlefield of the counter-revolution. Saudi Arabia drew a line against the spread of democracy protests into the Gulf. It torpedoed an attempted political bargain between moderates in the al-Khalifa regime and the organized opposition in favor of a draconian, scorched field assault on all independent political life. On March 14, Saudi tanks rolled in to enforce the hard-line policy, at the invitation of the Bahraini monarchy, and pushed a sectarian Shi’a and Iranian face on the Bahraini democracy movement. The sharply sectarian turn, as the Sunni dynasty painted a Shi’a and Iranian face on their domestic opponents, marked the first point in the Arab uprisings when the “Cold War” of the 2000s fully imposed itself upon its successor. It would have been a delicious historical irony had the Saudi dispatch of troops to Bahrain followed the path of the Iraqi attempt to do the same in Jordan in 1958. During the original Arab cold war, Baghdad played Riyadh’s part as the heart of the counter-revolution, and its effort to send troops to shore up a conservative ally ended with a bloody military coup. The Saudis were taking no such chances this time.

Saudi Arabia also sought to bolster friendly monarchies outside the Gulf against domestic challengers. It mended ties with Qatar and pushed the Gulf Cooperation Council (GCC) forward as the premiere regional security organization. It offered significant financial assistance to Jordan and Morocco, and even tendered a somewhat baffling bid to allow the two entry into the GCC. Both monarchies offered limited reforms in an attempt to placate the moderate wings of their opposition movements. They also sought to rebuild ties with the military regime ruling Egypt. Initially furious with the loss of Mubarak — which in their view the Obama administration discarded “like a used kleenex” — they nevertheless moved quickly to cement their relationship with Egypt’s SCAF by promising significant financial assistance. It is also widely believed that they poured financial, political and media support into friendly political movements in Egypt and around the region, including the Muslim Brotherhood, salafi trends, and conservative business interests.

While many in the region now see counter-revolution anywhere, in fact this trope likely gives far too much credit to the Saudis, the SCAF, and the rest of the alleged conspiracy. They are certainly trying to shape regional politics to their liking, but the results have not been particularly impressive. The Saudi effort to broker a transition plan in Yemen has gone nowhere. The near collapse of the Yemeni state left politics gridlocked, with not even the dire wounding of President Ali Abdullah Saleh in a mysterious attack and his flight to a Saudi hospital breaking the stalemate. Its early enthusiasm for intervention in Libya, fueled in no small part by long-festering resentment over Moammar Qaddafi’s reported attempt to assassinate King Abdullah, faded. The regime long seemed baffled by the unrest in Syria, unable to decide how to respond to the turbulence. It remains to be seen whether it can sustain the level of energetic diplomacy of the last few months as a succession crisis looms and regional challenges mount. And even if it does, little in its diplomatic record over decades suggests that its approach of throwing money at problems will work.

Saudi Arabia’s alliance with the United States has thus been sorely tested by the Arab uprisings. Where the Obama administration sought to place itself on the side of history, supporting popular aspirations against autocracy, its most important Arab ally chose instead to double down on autocracy. The U.S. recognized the damage done to its policies by the crackdown in Bahrain, but declined to openly challenge the Saudi initiative. Washington and Riyadh still agree on the challenge posed by Iran, but increasingly diverge not only on the traditional Arab-Israeli front but also on the response to the Arab uprisings. This POMEPS briefing offers perspective on Saudi Arabia’s current position and suggestions as to where it might be headed.