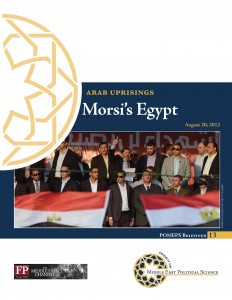 Egyptian President Mohamed Morsi’s sudden move last week to oust the senior leadership of the Egyptian military broke a long period of political stagnation and began to bring into view the contours of the emerging political order. It reversed views of Morsi almost overnight. Only two weeks ago, most analysts had written Morsi off as a weak and ineffective executive boxed in by the ascendant military leadership of the Supreme Council of the Armed Forces (SCAF). After his bold move against the SCAF and reversal of its constitutional decrees, many now fear that he and the Muslim Brotherhood stand at the brink of nigh-totalitarian domination.

Both the earlier dismissal and the current exaggerated fears seem premature. Egypt’s politics remain polarized, its economy staggering, its institutions decayed. Rules of the game remain in flux, with the constitution still unwritten, parliament dissolved, and the judiciary viewed through a partisan lens. Morsi and the Muslim Brotherhood’s accelerated push for power risks triggering a backlash, not only from anti-Islamist forces but from centrists uneasy with ideological domination and from Salafi and other Islamist forces jealous of the movement’s position. The military may have suffered a setback, but it retains great institutional and economic power, the respect of the Egyptian public, and (lest we forget) guns. Revolutionary forces have been relegated to the sidelines in recent months, but could rekindle street politics at any moment. In Egypt’s polarized political environment, fueled by its contentious and turbocharged media and online public sphere, no consensus is likely to soon emerge.

In short, it is still too early to tell which direction Morsi will take Egypt, which forces will cooperate, and which forces will move to resist. There are a number of common theories of the case. One, pointing to deep-seated mistrust of the Muslim Brotherhood, Morsi’s unprecedented monopoly on formal power, and disturbing moves against the independent media, demonstrates fear that he will now seek to impose Islamist hegemony. Another sees the military still largely in control, sacrificing its aging figureheads and public political role in exchange for more entrenched power behind the scenes. Still others see Morsi’s move as an important step in advancing the transition from authoritarianism to a democratic system by establishing civilian control over the military.

Which of these is correct? Is Egypt still under SCAF’s control, heading toward an Islamist theocracy, on the road to democracy, or on the brink of economic and institutional collapse that will make a mockery of the high political games that dominate the headlines? The rapid shift in the narrative should breed at least some analytical humility. Many argue the drafting of the constitution will reveal the truth, but it seems unlikely that any greater interpretive consensus will emerge around that process than has been seen around any other point in Egypt’s long, tortured transition to a post-Mubarak era.

“Morsi’s Egypt” offers a wide range of analysis of how Egypt got to this point, where it may be going, and how to understand it all. It ranges widely over the dizzying moves of the last few months, including controversial moves by the judiciary around the presidential election (“Calvinball in Cairo,” “Cairo’s Judicial Coup,” and “Egypt’s Injudicious Judges”); the role of the military (“The Egyptian Republic of Retired Generals,” “Hard Choices for Egypt’s Military,” “What Morsi Could Learn from Sadat,” and “Cobra and Mongoose Become Lion and Lamb”); the struggles of non-Islamist political forces (“Can Egypt Unite?,” and “It ain’t just a river in Egypt“); the Muslim Brotherhood’s calculations (“Monopolizing power in Egypt,” “Brother knows best,” “Bad news for – and from – the Brotherhood,” and much more. Download “Morsi’s Egypt” here!