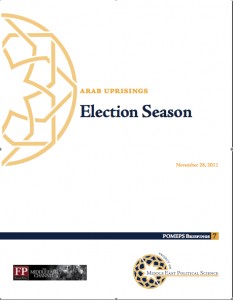 On Monday, November 28, Egyptians went to the polls for the first round of parliamentary elections. Those elections are perhaps the most momentous of a recent wave of Arab elections. Tunisia’s election on October 25 went almost unbelievably well. Oman’s went almost entirely unnoticed. Morocco’s played their assigned role. The announcement that Yemen would hold presidential elections in February has thus far been met mostly with disbelief. Elections may be on the horizon in Kuwait, after the resignation of its government, and Palestinian President Mahmoud Abbas has announced May 4, 2012 as the date for elections in the West Bank and Gaza. It’s election season in the Middle East.  But are elections the right way forward for these countries in transition? Will they change anything?

The question is most urgent in Egypt. The elections had been thrown into doubt after several days of intense violence and massive demonstrations in Cairo and across the country spurred by the unprecedented violence employed by the regime’s security forces. But after replacing the government and offering limited political concessions, including moving the date forward for promised presidential elections to June 2012, Field Marshal Mohamed Tantawi, head of Egypt’s ruling Supreme Council of the Armed Forces (SCAF), announced that the parliamentary elections would go ahead as scheduled. Voting began on November 28, and will extend for three rounds over six weeks.

The argument for Egypt’s elections is simple: the only way to have a transition to democracy is to start making a transition to democracy. An elected parliament, whatever its composition, will become the first civilian institution with the ability and legitimacy to stand up to the SCAF and will almost certainly move to assert its authority. The Muslim Brotherhood and other Islamists have always been likely to do well, given their organizational presence and their determination to actually campaign, but that would be the case no matter when the elections would be held. Elections, as Rabab el-Mahdi argues, might not be sufficient for democratic change but they are a necessary step.

But the arguments against holding such elections were also strong. They would take place in the absence of a constitution, leaving the powers and role of the new elected body unclear. Many doubt that the ruling SCAF actually intends on a real democratic transition, particularly as it cracks down on protestors and offers up constitutional principles that entrench the military’s power. The election law is fiendishly complex. There continues to be massive confusion about the electoral system and procedures. And the elections stretch out over six long weeks, leaving all too much time for panic over the early results. Islamist groups and former regime members have been far more active in election campaigns than their liberal or revolutionary counterparts.

Many activist groups and liberals question the very premise of the elections. Their reservations about the elections long pre-dated the violence. Many worried about legitimating a political process under military rule, by participating in elections to a fundamentally powerless legislature. Others recognized that they would not likely win, and feared either Islamist domination or their own political marginalization. There is a genuine tension between street politics and democratic institutions. Until last week’s violence, most nevertheless seemed to have decided in favor of participating in the elections. With the week of violence, many seem to have moved in the other direction, declaring their intention to boycott, suspending election campaigns, and setting up camp in Tahrir — but in the event, most seem ultimately to have opted to vote. Their participation likely won’t affect the final vote very much, given that few seemed likely to win anyway and their small numbers would likely be swamped in a large overall turnout, but it could affect the perception of the legitimacy of the resulting parliament among both the foreign media and the Egyptian political class.

Beyond Egypt, elections have been a mixed bag. Tunisia defied the skeptics and on October 25 held genuinely successful elections for its Constitutive Assembly. High turnout, limited fraud, and an impressive performance by the independent election commission gave procedural legitimacy. The Islamist Party, Ennahda, won a plurality, but not enough seats to govern alone. It quickly moved to reassure other political forces, and agreed to seat the human rights campaigner and leader of a secular political party, Moncef Marzouki, as president. Tunisia’s elections confirmed the general perception of positive change and seem to have achieved what can be hoped from such transitional elections.

Elections in two monarchical regimes have been less transformative. Unprecedented elections to a consultative assembly in Oman on October 15 did offer a political, institutional response to an emerging protest movement. Participation in the elections was very low, however, and the assembly had only limited powers. In Morocco, elections on November 25 had a familiar feel to them. While the mildly Islamist Justice and Development Party won a plurality, with about one quarter of the seats, and the government claimed a respectable turnout of 45 percent, the elections did not fundamentally change the political system. They took place as part of a limited reform package initiated by the monarchy and preserving all of its core powers. Most activist groups therefore boycotted, and few perceived any serious changes. In some countries, such as Qatar, this year’s events even seem to have reduced the appeal of democratic change. In Kuwait, which has long had the most contentious democratic politics in the Gulf, new elections will be part of an established political game.

The turbulence in Jordan and elsewhere suggests that maintaining the status quo without accommodating the increasingly mobilized public will not be easy.  For all the discontent and doubts about these elections, the hard fact is that elections are the only way to translate popular mobilization into a democratic transition. Elections will never be enough on their own to create democracy, without constitutional guarantees of political freedoms and human rights, and in some circumstances can make things worse (as in Iraq in 2005). This briefing therefore surveys the role of elections across the region, in all their promise and peril.