*This memo was prepared for presentation at the Contemporary Turkish Politics Workshop at Rice University’s Baker Institute on  October 14, 2016

In the aftermath of the Arab uprisings, many policymakers and scholars, from leading American commentators to political elites in the MENA region, pointed to Turkey as a political model for transitioning countries. This debate produced a number of studies examining different aspects of the Turkish model, ranging from domestic politics and foreign policy activism under the AKP to public opinion regarding Turkey and Turkish foreign policy in the Middle East (Altunisik, 2005; Göksel, 2014; Kaddorah, 2010; Kubicek, 2013; Özcan, Köse, & Karakoç, 2015; Perekli, 2012; Tol, 2012; Tuğal, 2016).

However, not unlike previous discussions of the Turkish model in the 1990s in regard to the then-newly independent Turkic states in Central Asia, these discussions have not survived long, and proponents have lost their previous enthusiasm. Several explanations have been offered for the decline of Turkey’s appeal in the region. First, the Arab uprisings have failed to bring about the desired political and economic developments. Second, Turkey has also been perceived as an ineffective actor in pushing for democratic and peaceful solutions in the region, whether in Egypt, Libya or Syria. Third, the growing ethnic and sectarian tensions in the country, the stagnation of its economy, the curbing of political liberties, especially since the Gezi Park protests and the criticism of its increasing authoritarianism and the constant portrayal of Recep Tayyip Erdoğan as an authoritarian leader in the international media have led to increasing criticism of the Turkish model (Taşpınar, 2014; Tuğal, 2016).

These explanations account for why the Turkish model has lost its earlier appeal, but they do not explain the persistence of substantial support for it in some countries. While positive assessments of the Turkish model have declined precipitously in Turkish and international media, this study argues that the decline in popularity of this model has not been uniform in the Arab streets, with variations across the MENA region. As we show with our public-opinion survey in Tunisia, perception of Turkey has remained largely positive despite Turkey’s continued move toward authoritarianism. Turkish popularity in the region has been less affected by domestic developments in part because, relative to the monarchies, military regimes and single-party regimes that do not even allow free elections, the Turkish political system may still be more appealing to the people in the region.

In addition, the existence of some positive perceptions of Turkey as a model country should not be surprising, as the economic, political, and social demands (bread, freedom and human dignity) of the Arab uprisings, persist in these countries, with no prospect of improvement in the short term. In contrast to Tunisia, the Turkish model does not inspire most of the population in Lebanon. We argue that the ramifications of the Syrian Civil War, especially the impact of the refugee crisis, on domestic Lebanese politics has significantly reduced support for the Turkish model despite the relatively high evaluation of its economic and political systems.

Regardless of the drop and variation in support for the Turkish model across the region, an important question remains unanswered: To what extent has the Turkish model been received positively, and why did it appeal to people in the Arab Middle East in the first place? As potential explanations, some have pointed to the democratic nature of Turkey as a Muslim-majority country, while others have noted that the secular character of the Turkish political system in a relatively religious country serves as a model for these countries. Others have asserted that it is Turkey’s economic performance that is most appealing to the people of the region. Taking these different factors into account, Ennis and Momani (2013, p. 1130) argue that the Turkish model has caused Arab perceptions of Turkey to shift from seeing it as a “military state,” with negative imperial legacies, to a “trading state,” a modern regional hub of economic productivity. Or could it be that, as some argue, the Turkish model only appeals to supporters of political Islam?

Using original surveys in Lebanon and Tunisia, this study demonstrates that support for the Turkish model has been particularistic. In Lebanon, the Turkish model has little support beyond Sunni Muslims, whereas it has almost no support among Shia and low support among Christians and Druze. In Tunisia, it finds substantial support among secular Tunisians as well as Ennahda supporters. Our surveys show a near consensus in both countries regarding Turkey’s strong economy, while views differ regarding its secular and democratic nature. We also show that citizens of both countries are highly critical of Turkey’s policy regarding the Syrian conflict, while its policy toward Israel receives relatively substantial support in Tunisia.

Support for the Turkish Model in Tunisia and Lebanon

We conducted original public-opinion surveys in Tunisia and Lebanon in November 2014 and October 2015, respectively. These two countries provide significant variation in our main variable of interest, but they also reflect ethnic and religious variation in the region. In addition, both countries have been politically and economically affected by political developments surrounding the Arab Uprisings. In particular, Libyan refugees and terror attacks in Tunisia and Syrian refugees in Lebanon remain important political and economic concerns, increasing anxiety regarding the political and economic stability of both countries. Finally, both countries have unfinished democratic transitions and relatively open societies that reduce problems concerning running a public opinion survey in the region.

Our first survey was conducted in Tunisia, right after its parliamentary election on October 26, 2014. The face-to-face interviews were completed between November 2 and 21, 2014, with a sample of 1,500 adults over the age of 18. Stratified random sampling was adopted to collect data in a country where economic inequalities, as well as urban-rural differences across regions, are substantial. The face-to-face interviews in Lebanon were conducted between October 2 and 26, 2015 with a nationally representative sample of 1,200 adults over the age of 18, using the Probability Proportional to Size (PPS) sampling technique.

To determine the level of positive attitudes toward Turkey, we asked Tunisian and Lebanese respondents two questions, but here we will present only one, as both yield similar findings: “Following the political changes during and after the Arab Uprisings, most people have offered various countries that Middle Eastern countries might consider as models to emulate. Please tell me how positively you would consider the following countries as models for Middle Eastern countries. Please respond on a scale of 1 to 5, where 1 corresponds to ‘Not positive at all’ and 5 corresponds to ‘Very positive’. ”[1] We also asked people’s attitudes toward three other countries to compare with Turkey.. 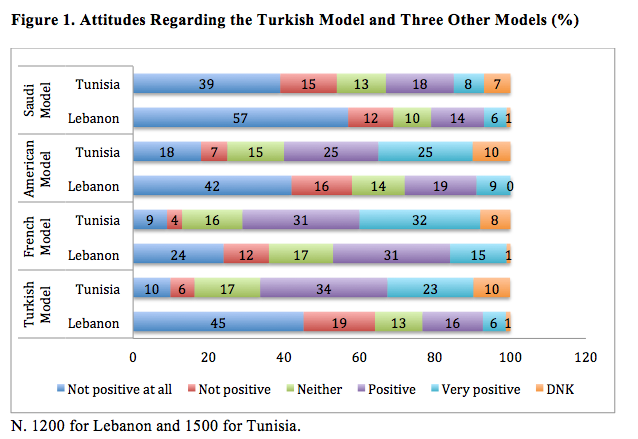 Political and Sectarian Cleavages and the Turkish Model 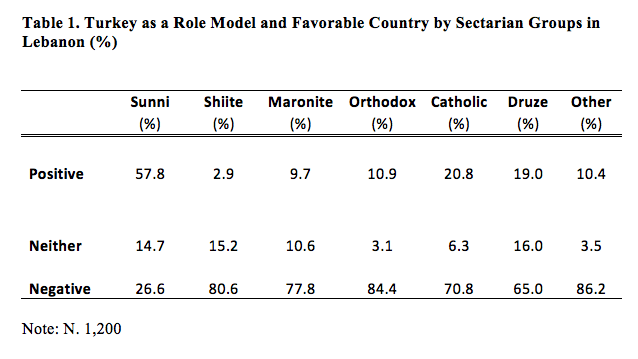 We have presented empirical evidence for the level of positive attitudes regarding the Turkish model, but doesn’t answer why people consider Turkey a model country. We asked the respondents the following questions: “Please tell me to what extent you agree with the following statements about Turkey. Please respond on a scale of 1 to 5, where 1 corresponds to ‘I strongly disagree’ and 5 corresponds to ‘I strongly agree’: Turkey has a democratic political system; Turkey has a good economy; Turkey has a secular political system; Turkey is a close ally of the West.” These variables are recoded as follows: 1 disagree, 2 somewhat agree and 3 agree. 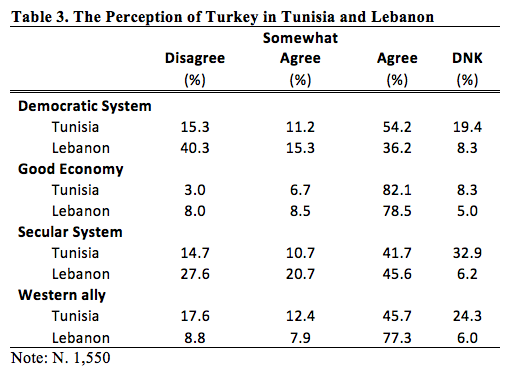 Another significant divergence emerges regarding whether Turkey is a close ally of the West. Seventy-seven percent of Lebanese agree with the statement and only 9 percent disagree. Interestingly, only 46 percent of Tunisians see Turkey a close ally of the West, and 18 percent think the opposite. Except for the question regarding the Turkish economy, we observe a significant variation within and across both countries regarding the perception of the Turkish political system and its relations with the West. In order further to study this, we disaggregate these perceptions by political and sectarian identity.

Perception of Turkey and Identities 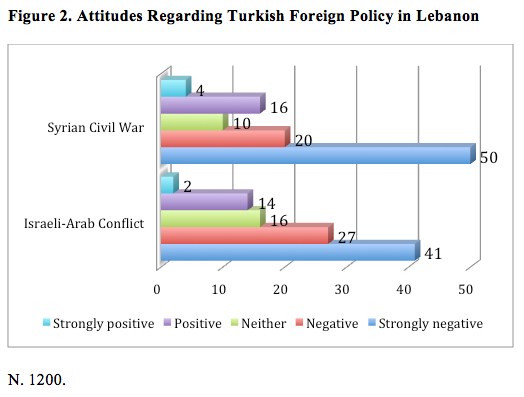 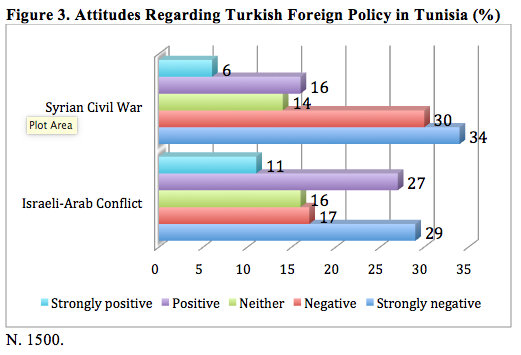 This research shows that, despite Turkey’s move away from democracy, positive attitudes toward Turkey persist in Tunisia, where the Turkish model is regarded highly only by Sunnis. Interestingly, despite the differences regarding the Turkish model in the two countries, there are some similarities and substantive positive attitudes regarding Turkey’s political system and economic performance. Tunisians and Lebanese with different political and sectarian identities hold relatively similar positive attitudes regarding Turkey’s economy and relationship with the West. Even though a substantial percentage of citizens of both countries consider the Turkish political system to be democratic and secular, there is not much enthusiasm for Turkey in Lebanon, unlike in Tunisia.As well, we find that support for Turkish foreign policy regarding the Israeli-Arab conflict and the Syrian civil war is low in both countries, with a significant variation in support across Lebanese sectarian groups, but less variation across Tunisian political groups.

If the findings hold in other MENA countries, we would expect support for the Turkish model to be low or only exist among political Islamist or Sunni groups in countries with Shia-dominated regimes. Indeed, our research on Iran and Masoud et al.’s (2015) findings on Egypt provide empirical evidence for the findings here. This research also suggests that citizens of countries in the region or supporters of Islamic parties may not be aware of Turkey’s democratic deficiencies and repressive policies toward the secular political opposition. This may be because civil and political liberties are more restricted in their own countries than in Turkey, because of their sympathy for the AKP as an Islamist party, or because Islamist groups in particular may consider the AKP a role model. Regardless of the reason – which future studies may be able to determine more precisely – this research shows that the region will keep looking for political models in the future, and we hope that the region finds a better model than Turkey today.

Kubicek, P. (2013). Debating the Merits of the” Turkish Model” for Democratization in the Middle East. Alternatives: Turkish Journal of International Relations, 12(3).

Tuğal, C. (2016). The Fall of the Turkish Model: How the Arab Uprisings Brought Down Islamic Liberalism. London: Verso Books.