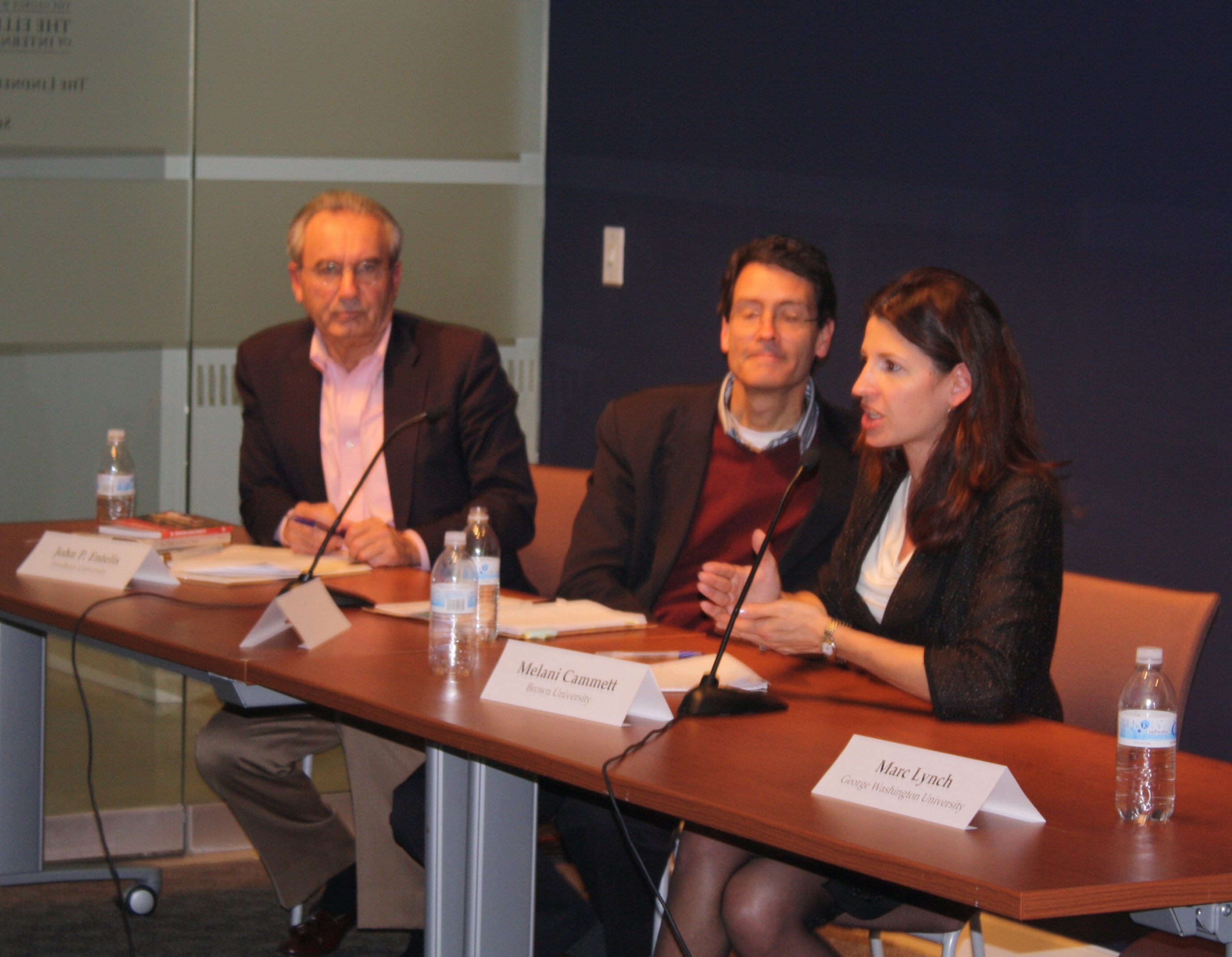 Melani Cammett, associate professor of political science at Brown University, discussed the post-revolutionary institution building in the run up to the elections, the adoption of the electoral law, what it meant for the results, and the challenges that lie ahead. Cammett described how the electoral law and the closed-list proportional representation system were adopted at the discretion of the political reform commission. The consequence of the quota rule of the closed-list PR system was that the political party authorization process ultimately facilitated over 150 parties — there were enormous lists at the polling station, sometimes with 80 parties on a list. This had the effect of fragmenting the vote and wasting a number of votes. Cammett discussed the results of the election, which although were not yet official, showed the Islamist Ennahda party to be taking a significant lead. She observed that the parties that were the most stridently anti-Islamist did the most poorly at the polls and that those parties who expressed a willingness to form coalitions with Ennahda did better. Finally, Cammett closed by discussing the challenges ahead. In her view, the task is not only to write a constitution but also to govern in a climate that remains extremely difficult economically and politically. The first task for Ennahda is to address youth unemployment, which, given the current state of the economy, will continue to present a serious challenge.

Chris Alexander, associate professor of political science at Davidson College, discussed Tunisia’s election results and elaborated on near term challenges for Tunisia’s transition. The central result was Ennahda’s victory, which Alexander argued came as no surprise. In his view, it is a product of money (Ennahda was one of the best funded parties), its organizational grassroots presence, and its smart, big-tent political strategy. The big surprise, according to Alexander, was that the Progressive Democratic Party, viewed by many as likely to win a large number of seats, did very poorly. One way to view the election results is that Tunisian voters rejected polarized politics and any party that appeared to support polarization. Ennahda’s plan to form a coalition with the CPR and Ettakatol assuages the fears that the country will fall under solely Ennahda’s Islamist influence. All three parties also have significant overlap in their platforms. They share a clear commitment to human rights and place an emphasis on Arab and Islamist identity. Going forward, Alexander argued that the million dollar question is about Ennahda and its democratic pledge. The process of constitution-writing has to take place in the shadow of the next elections. The writers thus have a strong interest in the outcome of the next elections; they are not impartial bystanders. Can the democratic transition stay on track as it passes through a narrow pathway in close proximity to constitution-writing and electioneering? Alexander is optimistic given the path that the transition has taken so far.

John Entelis, professor of political science at Fordham University, emphasized the importance of personalities and people rather than institutions and ideologies in Tunisia’s current political landscape. Tunisia under authoritarianism was about personalities and Entelis believes that these personalities still matter. He distributed a set of political cartoons to the audience for insight into the political context. The cartoons demonstrated the fear that whenever Islamists were involved in politics that the result would be “one man, one vote, one time.” They expressed concerns that a standstill between Islamists and secularists would lead to stagnation and that the new government would impose sharia law. Entelis discussed five prominent characteristics that he said are representative of political personalities in Tunisia. All five represent a Tunisia that is a multicultural and multipolitical society. The common perception is that Tunisia is homogenous, but Entelis argued that this is not the case. Finally Entelis spoke about what he believes to be a fundamental change in Tunisian politics that reflects a different view of authority, power, and institutions. Young people have become severely disenchanted with formal politics. The extent to which the victors go back and operate according to formal mainstream political processes and organizations will determine whether they lose the attention and support of the segment of the population who were responsible for the revolution. Tunisian youth have come to believe that the existing authority structures are not relevant to their lives. They no longer see their identity as connected to traditional institutions, such as parties and unions. Entelis closed by asking: Will the generational gap reemerge if politics as usual resurfaces?