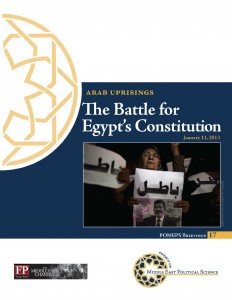 The Battle for Egypt’s Constitution

On December 26, 2012, Egyptian President Mohamed Morsi signed off on a new constitution. It was not a cheerful occasion for many politically active Egyptians, following one of the most intensely, dangerously polarized months in recent Egyptian history. The bitterly controversial two-round referendum approving the constitution revealed the depth of the political and social chasm which had been torn through the political class. I offered my own thoughts on the meaning of these events late last month in my “Requiem for Calvinball,” but that was only one part of the wide range of coverage on the Middle East Channel of coverage of the crisis. So I’m pleased to announce here the release of POMEPS Briefing #17: The Battle for Egypt’s Constitution, collecting our articles on the constitution and the political landscape left in the wake of this explosive crisis.

The constitutional drafting process, as Nathan Brown pointed out just before the explosion of the crisis, had been a shambolic mess for over a year and little resembled academic conceptions of how a constitutional process should unfold. There was little high-minded public discourse here, little search for wide national consensus, little attempt to reach beyond political interest to seek a higher dimension of political agreement. Rebuilding a ship at sea, in Jon Elster’s endlessly evocative phrase, never looked so perilous. Complaints about Islamist domination of the constituent assembly had led to mass resignations by non-Islamist members and excoriating commentary in the Egyptian public sphere. Backroom battles over the powers of state institutions intersected with principled arguments over matters such as the role of Islam and public freedoms. This was not the heady stuff of the great constitutional assemblies celebrated in the history textbooks — even before the surreal, late-night, non-deliberative ratification process. Read more…