What if the inclination of a terrorist group to adopt suicide bombing as a tactic is determined less by individual motivation, and more by organizational capacity and external linkages? In other words, direct and indirect diffusion may best explain why certain groups adopt suicide bombing, while others do not. Michael C. Horowitz makes a compelling case for this approach in “Nonstate Actors and the Diffusion of Innovations: The Case of Suicide Terrorism” in the Winter 2010 issue of International Organization. His argument is driven by the puzzle of why suicide bombing occurs. Rather than following individual-based approaches that parse motivations for the innovation of suicide terrorism, Horowitz develops an organizational theory drawing from political economy and military studies. Singling out the power of diffusion, the author thinks about suicide attacks as “a special case of diffusion in the military area.” His theory is a break from earlier work and “seeks to make suicide 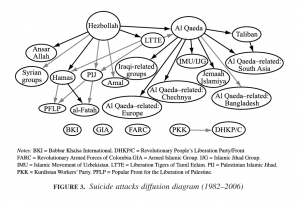 bombing more comprehensible by taking ideas about financial and organizational constraints designed to explain national militaries and applying them to terrorist groups.” A major strength of the approach is its understanding of both direct and indirect diffusion in the adoption of suicide terror. The former involves the direct sharing of information and technology between terrorist groups, as happened when Hezbollah and Hamas physically coordinated and trained together in 1992. The latter arises when ideas and actions inspire the adoption of tactics in the absence of physical coordination, as when Hamas “borrowed” the idea of the suicide vest from Tamil Tigers in Sri Lanka.

Horowitz explicitly understands the adoption of suicide bombing in terrorist groups as military innovation, “shifting the way a group does business.” As such, his evaluation is shaped by “adoption capacity theory”, drawing from military analyses. He makes two predictions: the greater the number of direct or indirect linkages between groups, where at least one uses suicide bombing, the greater the likelihood that the other group will adopt the strategy. Second, religiously-motivated groups, especially those from the same religious tradition, are more likely to adopt and diffuse the innovation. Innovation is contingent upon organizational capacity. Horowitz develops a methodology based on statistical analysis of all terrorist groups from 1968-2006, using illustrative examples in the qualitative section. In the end, the author presents a theory of the adoption of suicide terror through the lens of diffusion and network effects, rightly placing organizational capacity within the strategic environment.

Download “Nonstate Actors and the Diffusion of Innovations: The Case of Suicide Terrorism” if your library has access here or email info@pomeps.org for assistance.