*This memo was prepared for the “Evolving Methodologies in the Study of Islamist Politics” workshop, January 29, 2016.

What a Difference a Year Makes: Polling before the Arab Spring

Nationally representative surveys were first conducted in the Arab world[3] in the early 1990s by the World Values Survey[4] and other organizations. However, only about a dozen of the more liberalized Arab countries were surveyed by major cross-national projects by 2010. In surveys that were conducted, researchers probed attitudes about Shari’a law and the role of religion in the state, but questions about past or future vote choice—that is, precise political behaviors—where not included, due to their sensitivity. A measure of respondents’ preferred party appears to have been contemplated for the first wave of the Arab Barometer, conducted 2006-2008 in six countries (Morocco, Algeria, Lebanon, Jordan, Palestine, and Yemen), but this variable was not added to the final dataset. Following the Arab spring, researchers measured political ideology for the first time in the Barometer’s second wave in 2010-2011, asking which party best represents the respondent politically, socially, and economically. In Tunisia and Egypt, respondents were asked which party they had voted for in the first transitional elections in 2011.

The Transitional Governance Project organized two polls in Tunisia: one in 2012, just after the October 2011 Constituent Assembly elections,[5] and one in 2014, in the run up to the October parliamentary and November, 2014, presidential elections. [6] These elections and surveys are summarized in Table 1.

Table 1. Elections and TGP Surveys in Tunisia since 2011 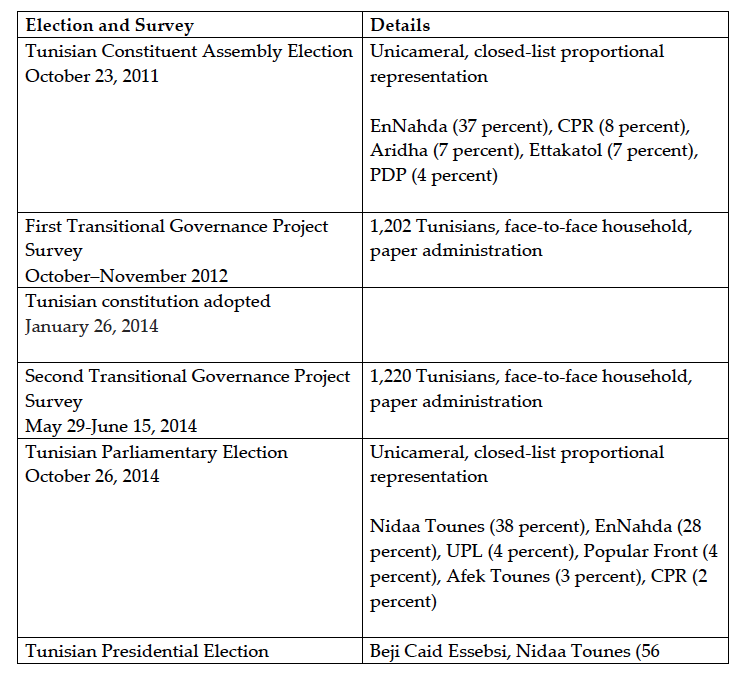 Using data from these surveys, Ellen Lust, Dhafer Malouche, and Jakob Wichmann conducted preliminary analyses to determine which voters supported Ennahda in the 2011 elections and how its base of support changed over time. [7] We found that while in 2011, Ennahda’s voters spanned a large spectrum—they tended to hold diverse views on the role of religion in the state and on economic issues—by 2014, they became more practicing and supportive of a close role of religion in politics. This suggested that while Ennahda remained popular, many voters, especially those less committed to having a more religious state, decided to vote for other parties in subsequent elections. It also showed empirically that an “Ennahda voter” does not equate with “Islamist.” By 2014, decided Ennahda voters were more likely to be male, older, from lower classes, practicing religion, and supportive of a strong role for religion in the state. They also tended to be more decided that supporters of other parties, who were more likely to state they were leaning for one of the dozens of secular parties in the field.

Second, we found that respondents viewed Ennahda as more religious than other parties, but that they varied in terms of perceived degree of religiosity. It is well known that Ennahda is more centrist than many other Islamist parties in the region (e.g., the Egyptian Muslim Brotherhood, Palestinian Hamas). Many respondents rated Ennahda as only moderately religious, hinting at the existence of constituencies for other parties to the right of Ennahda, which would later be legalized in 2012, including Islah (Reform) Front and Hizb al-Tahrir. Interestingly, when the interviewer was dressed in an overtly religious way, respondents tended to report that they saw Ennahda as less religious than when the interviewer was dressed in overtly secular dress.[8] Through these surveys, new insights into possible constituencies for the range of Islamist movements and parties that might eventually emerge in Tunisia and elsewhere came into greater focus.

Third, we also saw some of the key reasons for the decline in support for Ennahda between 2011 and 2014, though on this question in particular, more analysis is needed. Many who voted for Ennahda in 2011 decided to vote for Nidaa Tounes in 2014, due to Ennahda’s perceived poor performance on security and the economy. We found that Ennahda had the highest disapproval rating of any party in the country—more than 30 percent of Tunisians stated that they would never vote for Ennahda.

Fourth, using the 2014 data, we were able to anticipate what was likely to happen in the October 2014 polls. We found the secular Nidaa Tounes and the Islamist Ennahda polling similarly among decided voters, with the former slightly ahead. Although the majority of Tunisians were undecided at the time, the poll found that 33 percent of decided voters favored Nidaa Tounes, while 28 percent preferred Ennadha. (The results of the elections held later in October were 38 percent for Nidaa Tounes and 27 percent for Ennahda). We also found that Beji Caid Essebsi, who was later elected president, was favored by a wide margin four months before the election. While our poll results were not released publically before the elections, they gave us some confidence in the effectiveness of our methodology and provided a means of capturing a snapshot of voter behavior at a critical moment before the first regular election held in transitional Tunisia.

Fifth, we found that the proportion of decided voters — and the proportion of those decided for Ennahda — varied by district, offering information that is both useful to political parties as well as to academics seeking to explain why parties of different orientations appeal to voters in different areas and the factors that mobilize voters for different movements earlier and later in the campaign. For example, as of June 2014, two months before Tunisia’s 2014 parliamentary elections, only 13 percent of voters in Kairouan were decided, with 4 percent leaning toward any party, while 55 percent of those in Monastir were decided and 25 percent were leaning toward one of the parties. These and other aspects of Tunisian’s foundational elections merit greater attention and analysis.

Can Polls Be Accurate? Survey Research’s Strengths and Weaknesses

Many in popular and academic circles — including many experts in Islamist politics —express skepticism about polling methods. What about social desirability? Will people reveal their preferences?

These are important concerns, but a few points are worth noting. First, social desirability and preference falsification are also worries with other methods, including qualitative interviews—the most common method used to study Islamist parties and movements. While survey researchers may include caveats about what surveys cannot tell us, they should also point out what they can. With replication, surveys offer data that is representative of a large population, substantially adding to our ability to explain political realities and processes.

Second, survey methodologists have developed techniques to study and reduce the impact of social desirability on survey results. These include research on the effects of observable and unobservable interviewer traits, as well as mode studies, which assess how more private modes impact answers. (For example, consider how reporting sensitive answers might change if a respondent answers in a self-directed way on a laptop instead of in a face-to-face interview.) These techniques are crucial to both reducing bias, as well as studying social dynamics surrounding contested and sensitive issues. Consider the question referenced above that asks respondents to rate the extent to which Ennahda (and other parties) is a completely secular or completely religious party. That responses to this question (and every other survey question about support for Islamist parties) are systematically affected by the religious dress of the interviewer, suggests that Tunisians attach social meaning to the political role of religion and see it as contested. To avoid embarrassment or sanction, respondents systematically conform to the socially stereotyped views of the interviewer, and the extent to which they do depends on the perceived authority of the researcher.[9] Respondents implicitly sense that citizens disagree about Ennahda’s stance on religion and politics—whether it is too conservative or not conservative enough. This hints at the existence of a constituency in Tunisian society to the right of Ennhada’s positions.

New data from the Transitional Governance Project and the Arab Barometer offer under-utilized information needed to assess whether our expectations about Islamist parties and movements need to be reshaped. Changes in the landscape of the Arab world since the Arab uprisings impact the urgency with which we need to understand substantive questions around electoral politics and democratic political change, including changes in the Islamist landscape. And, we now have much more high quality data with which we can address these issues. Scholars have still only scratched the surface of what we can learn from this data.

[5] The Tunisian Post-Election Survey (TPES) was a face-to-face household survey conducted October 8-November 30, 2012 by the Transitional Governance Project shortly after the October 23, 2011 election of the Constituent Assembly. The poll was conducted by Lindsay Benstead, Ellen Lust, and Dhafer Malouche, with support from the National Science Foundation, Portland State University, Princeton University, and Yale University.