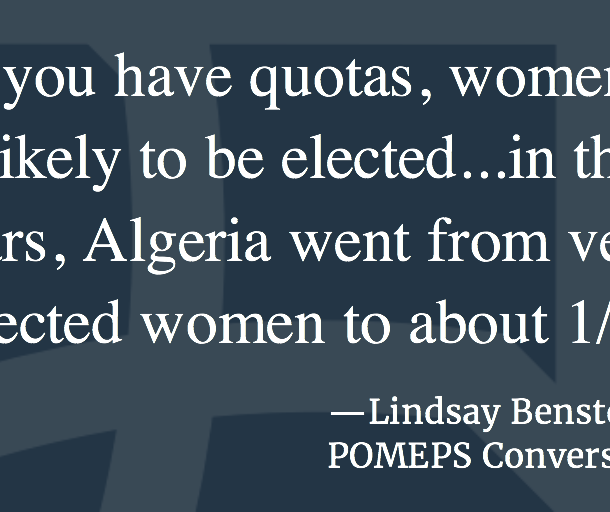 This week’s conversation is with Lindsay J. Benstead. She speaks with Marc Lynch about who votes for women, and why, in the Middle East. Benstead is noted for her work in survey methodology and public opinion in the Middle East. She’s written about gender quotas in governments, democracy in the Middle East, and Tunisia’s election and female candidates for the Monkey Cage.

Benstead is an assistant professor of political science in the Mark O. Hatfield School of Government at Portland State University, where she teaches courses on Middle East and North African politics and research methods. Her research focuses on identity politics, clientelism, public opinion, and survey methodology in the Middle East and North Africa. She is also a contributing scholar in the Women’s Rights in the Middle East Program at Rice University. She holds a Ph.D. in Public Policy and Political Science and a M.A.E. in Applied Economics from the University of Michigan in Ann Arbor.

Why Quotas Are Needed to Improve Women’s Access to Services in Clientelistic Regimes. Governance (2015).